I set up this blog to highlight the significance of the Nascom kit computers, designed and produced in the UK and first sold in 1977. To minimize cost, the buyer had to assemble their computer by hand-soldering over 3,000 joints.

The Nascom was popular among enthusiasts because most kits at the time only provided a hex keypad and segment display. Nascom supplied the parts for a full keyboard and video interface. Another factor was the Nascom's bus, which allowed for many expansion options such as a floppy drive and printer interface. Like me, many hobbyists put their Nascom into a 19-inch rack and added cards as their computer expanded.

My own Nascom-1 is still working after three and a half decades. More recently I have acquired a Nascom-2 in need of some serious renovation and another Nascom-2 (pictured below) in perfect working condition and complete with dual 5.5 inch floppy drive.

Ken Smith is a retired analog electronics and control systems engineer now living on the South Coast of England. Ken spotted the importance of 'digital' in the early 80s and used his Nascom kit to teach himself about the new microprocessors and programming. He later went on to design custom-designed equipment and control software for various industrial applications.

Over all these years, Ken had kept his Nascom in his study and in perfect condition, taking care to keep the components free of moisture, dust and within a purpose built cabinet.

Made of steel, the cabinet is immensely heavy and I have found no way so far to move it into my house. The parts of Ken's Nascom have therefore been carefully removed from the cabinet. The journey from Winborne to South London appears to have done them no harm at all.

Here is Ken's Nascom in its new temporary home. It is saying "Hello World" using the 1978 version of Microsoft Basic.

The monitor is from a Tandy TRS-80.

As you can see from these photographs, even the floppy drive is working correctly, listing the directory and reading files. Quite amazing.

In the next picture you can see Ken's Nascom loading a copy of an early Word Processor package called SPEX. 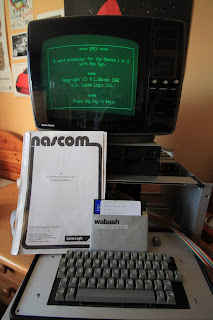 I know nothing of the history of SPEX (yet) but the manual shown in the photograph states "Copyright Lucas Logic, 1983". I cannot imagine that Lucas Logic (an early specialist in circuit testing) wrote the SPEX software themselves. Who wrote it, what they hoped to achieve and how it ended up at Lucas Logic, I have no idea.

The front cover of the manual describes SPEX as "An Advanced Word Processing System".

The SPEX floppy disk I have is stamped with serial number SPD000048.  Does this mean that at the time Ken Smith bought his copy, Lucas Logic had only sold 48 copies?


Nascom Microcomputers itself was acquired by, and became a division of, Lucas Logic Limited in 1981. The company was based in Welton Road, Wedgnock Industrial Estate, Warwick. Perhaps SPEX had already been acquired by Nascom.

If Lucas Logic were hoped to jump into the PC revolution of the 80s and 90s via its acquisition of Nascom and SPEX, history was not on their side. The same was true of many other pioneering UK companies of the period - misunderstanding the relationship between engineering innovation and business innovation.

My intention is to keep these machines safe and in working order until there is interest from a museum such as The National Museum of Computing at Bletchley Park.

During a very pleasant day with Ken, he showed me some of the software he had written during his career, including an application for the monitoring of channel dredging operations on-board ships.

Despite now being over 80 years of age, Ken is still reading about, and experimenting with electronics and software. His latest ideas are to develop devices to help those who are suffering a disability.

Using Ken's home built PC and the wonder of the WWW, I had the pleasure to introduce him to today's explosion of 'maker' activity and the ubiquitous Arduino and Raspberry-Pi devices. I am hoping that he will take the step to integrate these modern devices into some of the disability projects he has in mind. What a fantastic way to spend one's retirement!

Comments welcome on the subject of NASCOM microcomputers. No spam please.

The Nascom 1 and 2 were single-board computer kits issued in 1977 and 1979, respectively, based on the Zilog Z80 and including a keyboard and video interface, a serial port that could be used to store data on a tape cassette using the Kansas City standard, and two 8-bit parallel ports. To minimize cost, the buyer had to assemble a Nascom by hand-soldering about 3,000 joints on the single circuit board.

"The Z80 was an improved implementation of the Intel 8080 architecture, which was faster, more capable, and much cheaper; alongside the 6502 it was one of the most popular 8-bit processors for general purpose microcomputers and other applications. It was used in the Nintendo Game Boy, the Sinclair ZX80, ZX81, ZX Spectrum and the Amstrad CPC home computers as well as the MSX architecture and the Tandy TRS-80 series—among many others. More so than simply sparking improvements in the budding field of home computing and gaming, the Z-80 also sparked a revolution in electronic music, as the first truly programmable polyphonic synthesizers (as well as their peripherals) relied heavily on implementations of this CPU." --- Wikipedia